Recently a family friend, Art, ask me if I would like to see a quilt that his Mother, Bessie Baldwin, had when she was a child about 1920.  Her mother had made it for her. 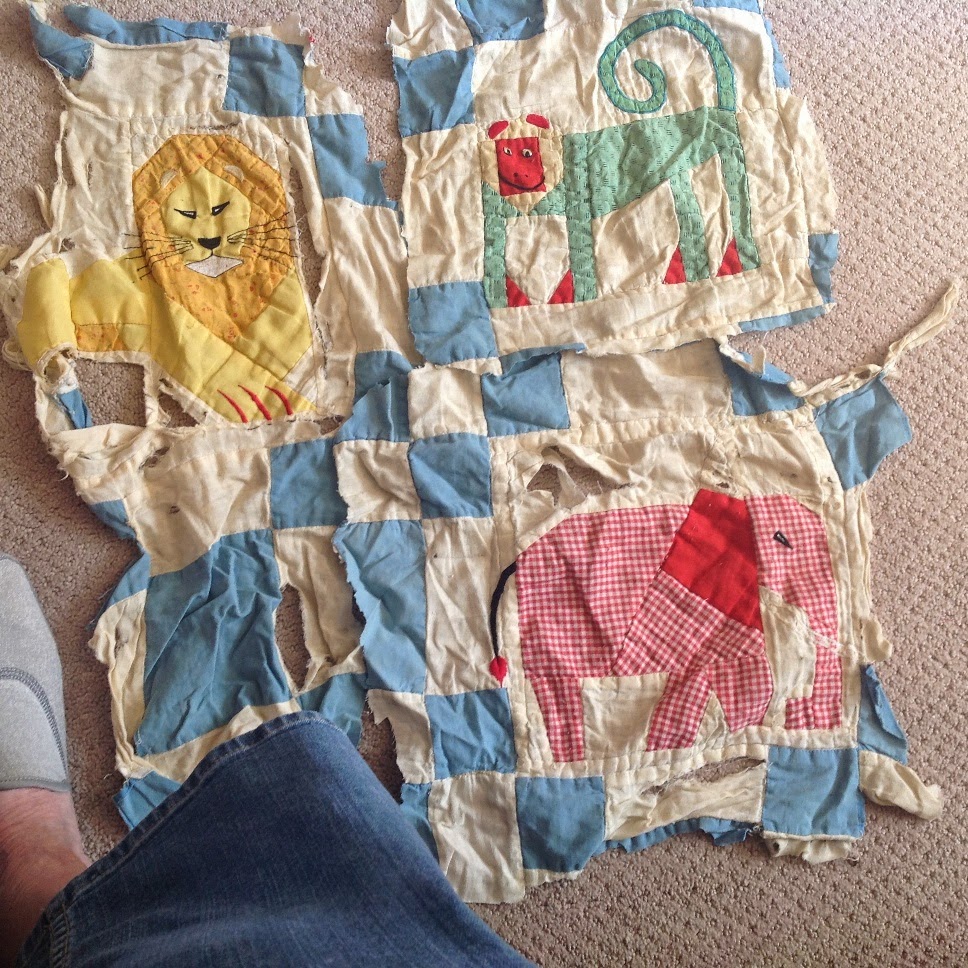 I immediately fell in love with these tiny pieces of fabric from over 90 years ago.
The background blocks were completely tattered, but the animal blocks were still pretty bright.  I couldn't believe that the person that made the blocks had actually pieced all those small parts.

I cut the blocks apart, gently washed and dried them and then cut around the blocks.  I decided that paper piecing would be the best way for me to duplicate these blocks, since I wasn’t about to piece all those small parts.

I have never tried to make a pattern on my own, but thought I would try one block and see if I could do it.  Not knowing what would be the proper way to start, I just got a sheet of typing paper, a pencil, and ruler, laid the paper on top of the block and traced each stitching line from the block.  Since I had traced from the top I knew that all of the patterns would be reversed, but didn’t think it would matter.

I used the ruler to straighten my drawn lines, marked the color to use and numbered the sequence to sew.  I wanted to try and make them in the same colors as the original blocks and used the same colors for the blocks setting them together.  I was ready to start my lion.

Here is how the lion turned out, on the left, compared to the original on the right. 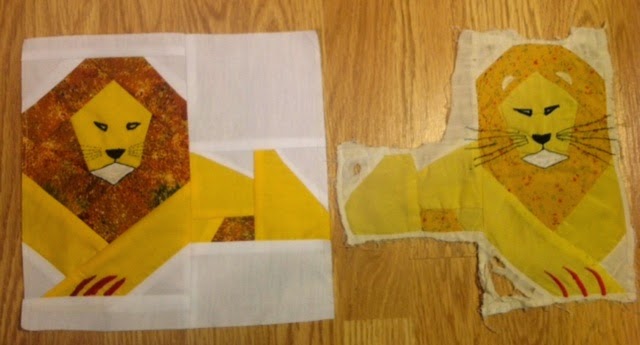 I embroidered the face, using a single strand of floss at a time.  After looking at it, I saw that I had only missed the ears!


I though the lion turned out OK, so I was ready to do the other seven blocks.  It only took one afternoon’s work to make all the patterns. 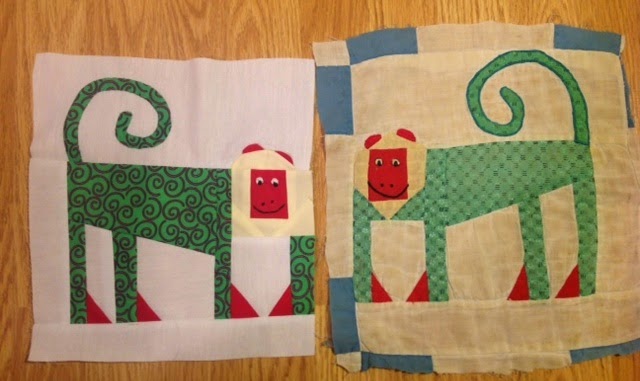 The monkey has a funny face.  His tail had been appliqued.  I cut out the tail pattern, placed it on top of two pieces of fabrics, right sides together and then sewed around the pattern.

I cut around the sewn tail, trimmed to about 1/8", and then put a straw through the opening and pushed the end through with the rounded end of a nut cracker.  It worked and I had a nicely stitched tail that I appliqued to the monkey. 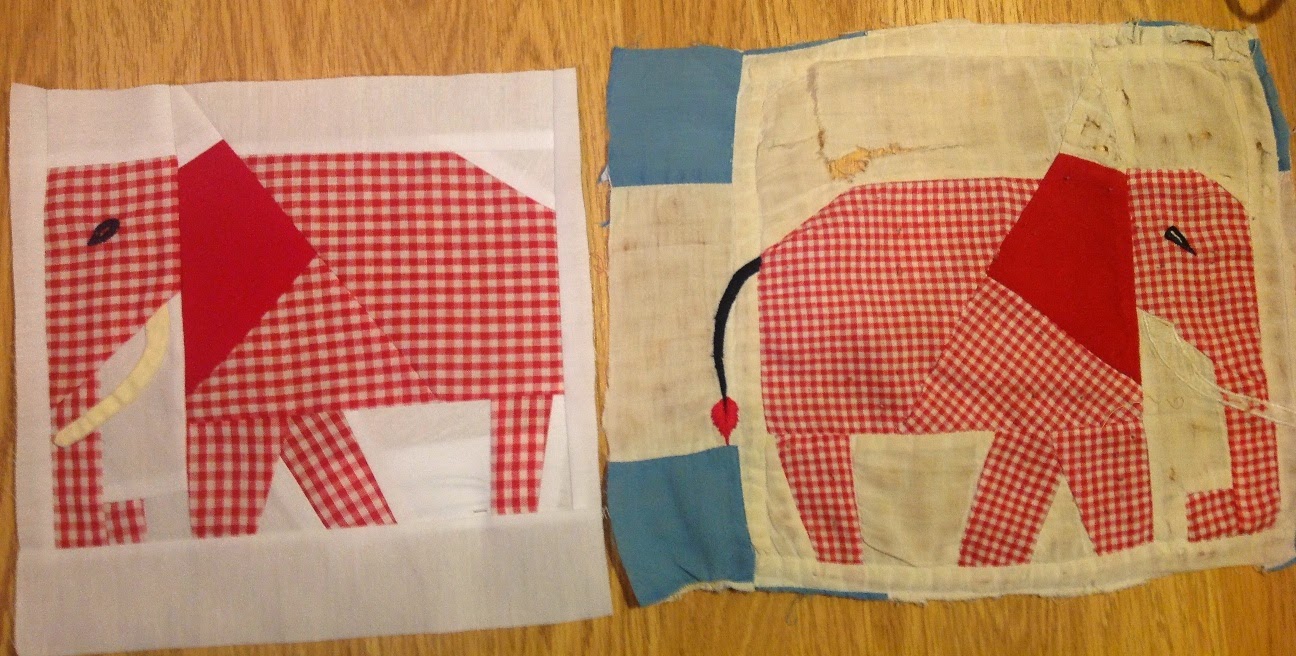 The elephant was easy.  The only change I made was to make an appliquéd tusk.  The original was embroidered.  The tail was embroidered after the blocks were set together. 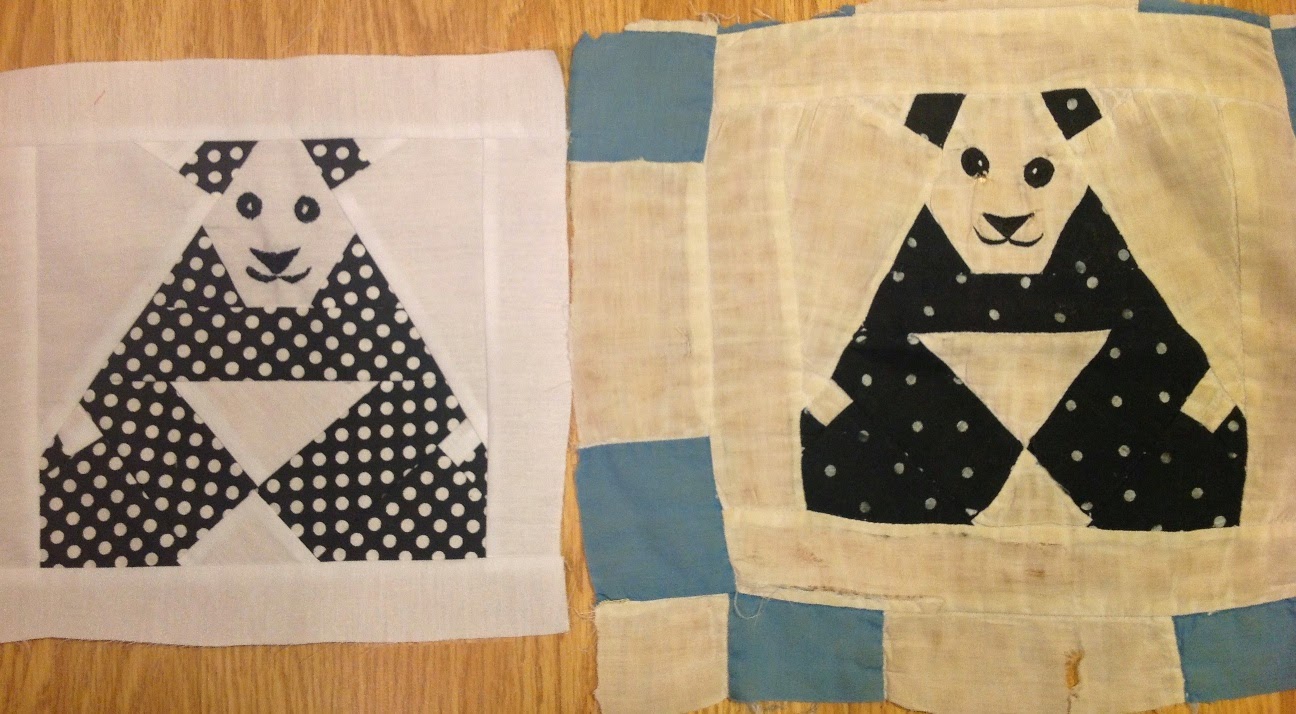 The bear was no problem. 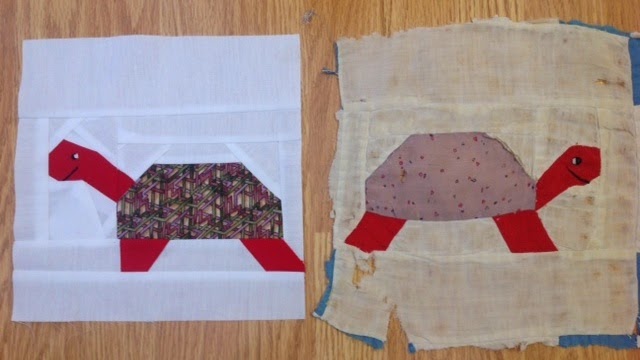 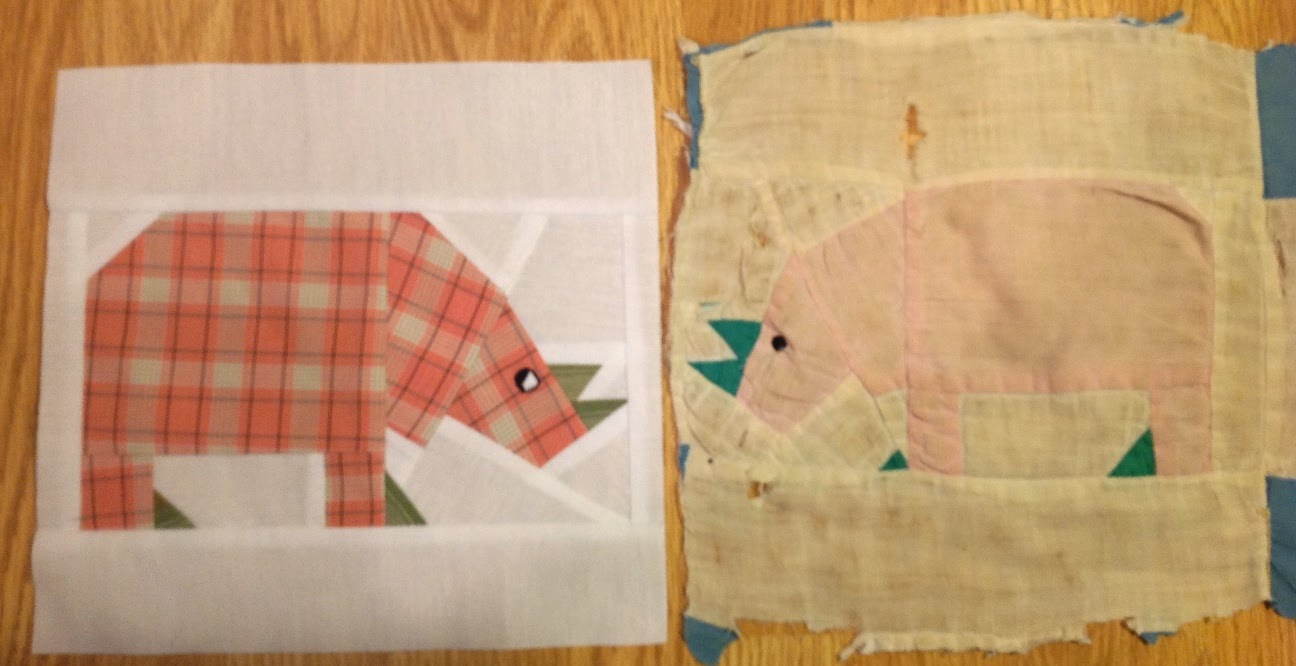 The rhino went along with no problems.

﻿
I found some tiger stripes in my stash and thought I would like that.  His tail was appliquéd the same as was the monkey tail. It actually goes over into the setting block. 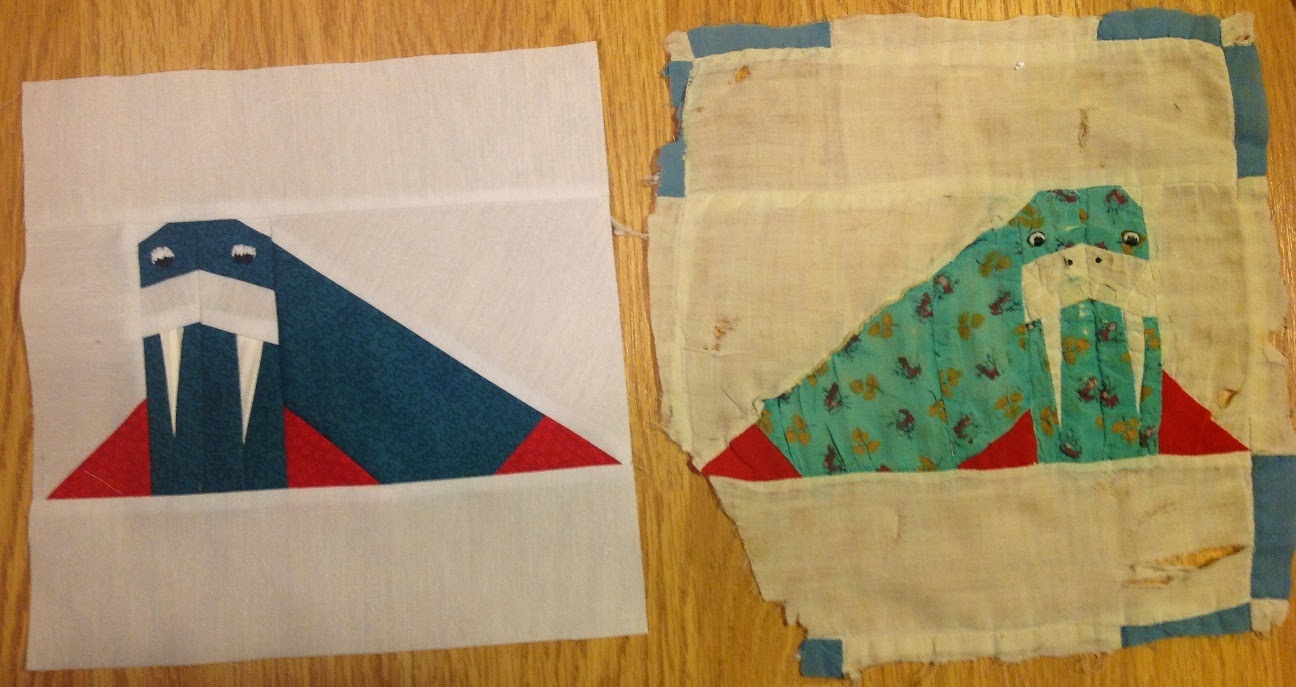 The walrus was fun to do.  No special problems.

On all blocks I added enough white background fabric so that I would be able to trim them square to the size of the setting block.  They ended up being 9 1/2" blocks.
The setting block, a nine patch, has a 2 1/2" corners and sides,  the center is 5 1/2" 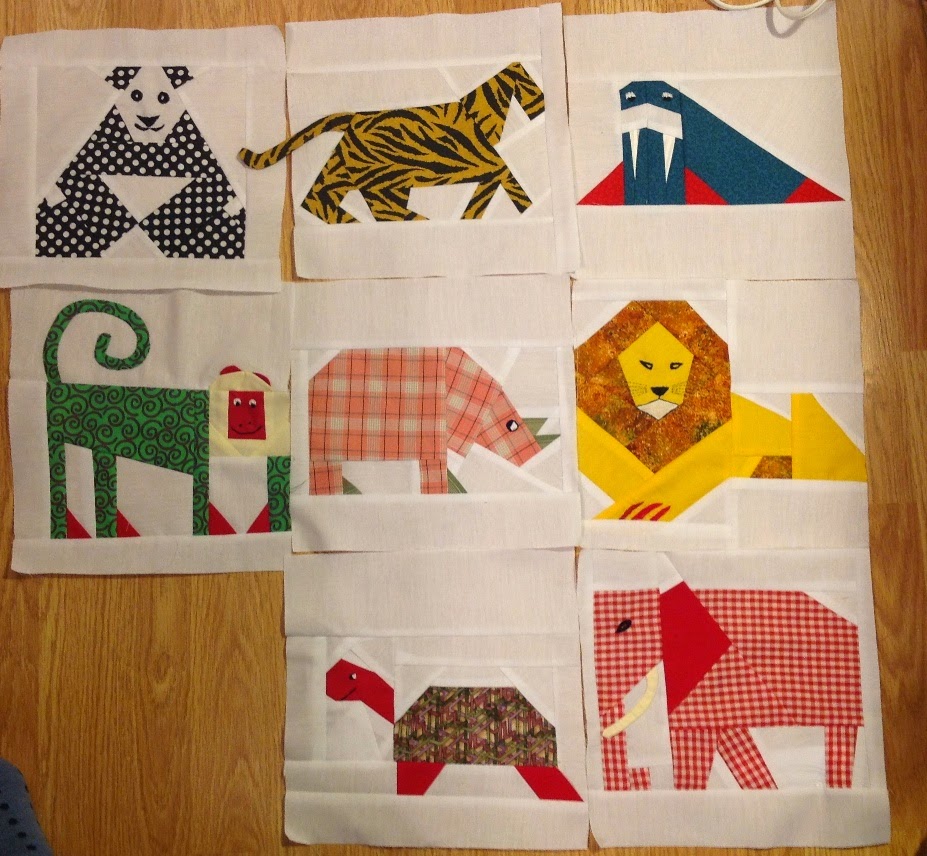 Sorry about the next photo being upside down!!!
I cannot get it rotated any way I try, but am going to leave it because it shows how the blocks went together.
﻿ 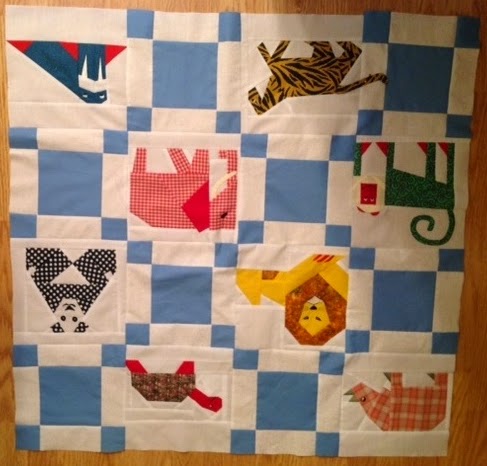 The blocks were set together, same as the original.  I felt that I would like it better if there was some color on the outside so a pieced border was in order.

And Then cut them into 2 1/2" rows to become the center squares in the border. 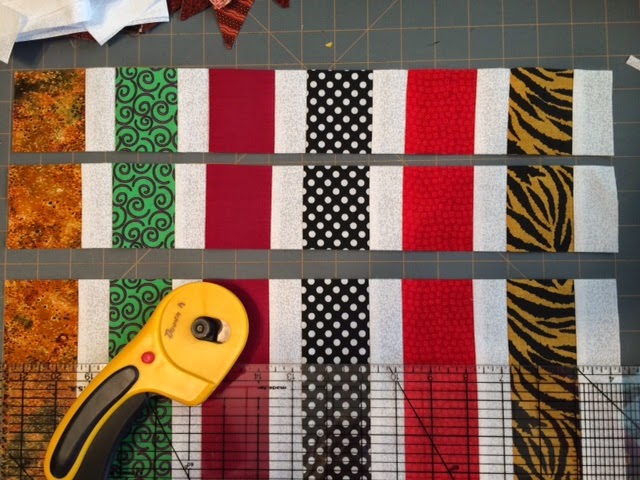 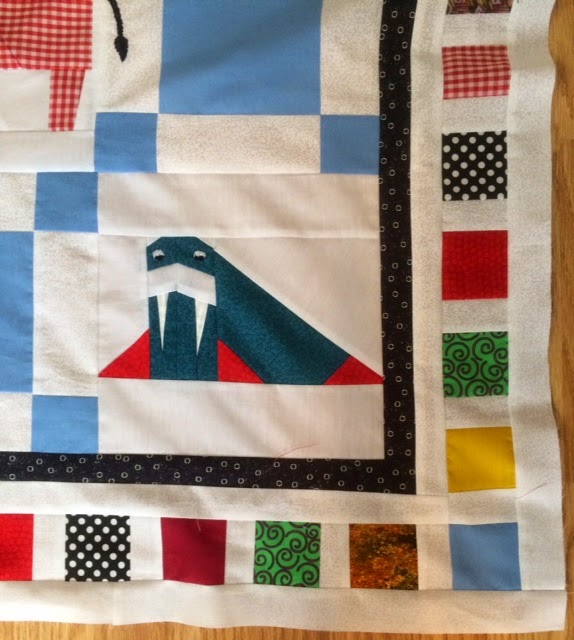 The 5” finished border is a black 1 ½” strip to frame the center.
A  1 ½”white border on each side of the colored 2 ½” squares,  which make the colored squares float.

﻿
﻿
On this type of border, start from each end and make any adjustment to the background for a perfect fit in the center.

Here is my finished quilt top.  Haven't decided how I will quilt it yet.  The binding is made and pressed.  It will be the blue fabric from the setting blocks. 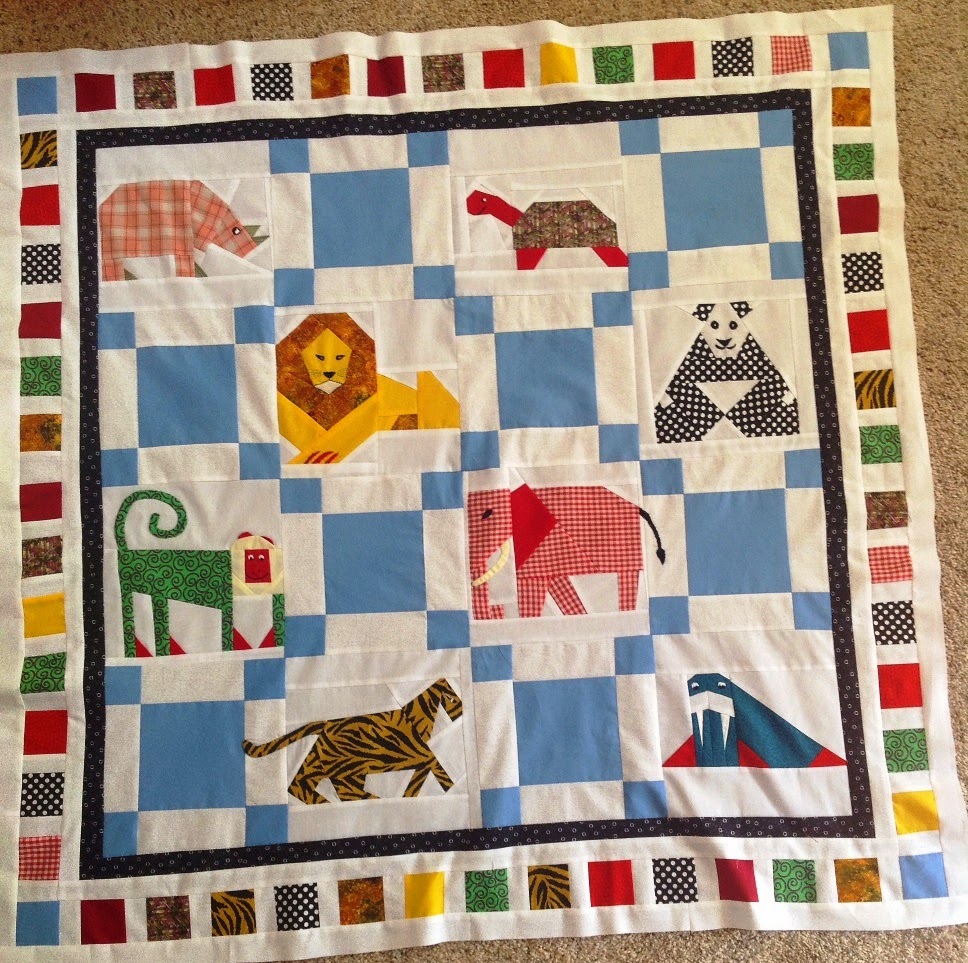 I am 80 years old and have been sewing since I was a very young teenager.  In all of those years of sewing I have never had a project that I enjoyed more than this one.
To find I could still do something new, like making the paper piece patterns and finished them so I could save the original block patterns was an accomplishment for me.
I don’t have any idea where the original pattern came from, but it appears to me to be circus animals.  Would make a cute baby room wall hanging or crib quilt.

Because Art so generously gave me the original blocks, I am naming the quilt “Art’s Animals”.  I hope he will enjoy seeing his Mother’s old quilt come to life.
Posted by Donna's Quilts 4U2C at 12:02 PM